CAN MISTLETOE BE AN EFFECTIVE TREATMENT FOR BREAST CANCER? 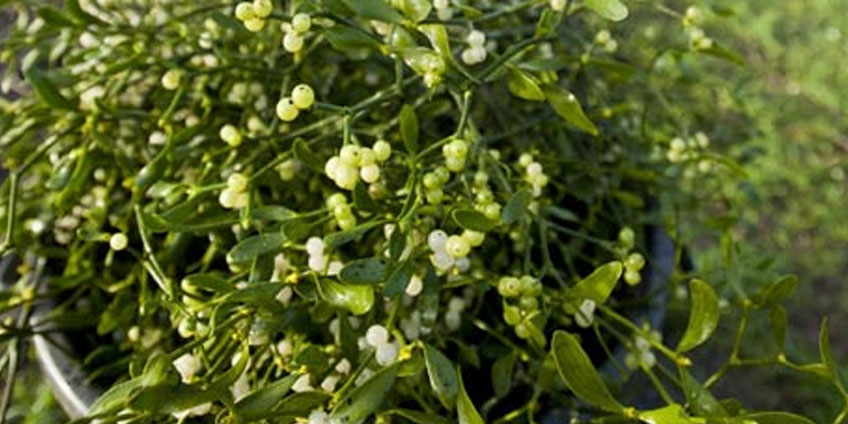 Mistletoe might be good for more than just kissing and spreading holiday cheer. Did you know that American mistletoe, the kind often associated with kissing, is only one of 1,300 species worldwide?  According to recent studies by the National Cancer Institute, mistletoe extract might be an effective treatment for several types of cancer.

A breast cancer diagnosis is frightening enough, but many women are especially apprehensive of the potential toxicity of traditional therapies such as chemotherapy. It is important to feel empowered and talk to your doctor about your options and various treatments.

A treatment that is gaining popularity in Europe and has recently been brought to the attention of the US when actress Suzanne Somers advocated for it– is mistletoe extract treatments.

Mistletoe is a semi-parasitic plant that receives its nourishment by growing on apple, birch, elm, maple, oak, pine and several other trees. The plant does not need soil to grow, but contains chlorophyll and is capable of undergoing photosynthesis.  It is naturally rich in magnesium, phosphorous, sulfur, and potassium.

In 2012, researchers from the University of Adelaide in Australia found that mistletoe extract was more effective at killing cancer cells than chemotherapy.

”This is an important result because we know that chemotherapy is effective at killing healthy cells as well as cancer cells. This can result in severe side effects for the patient,” researcher Zahra Lotfollahi said in their release.

European mistletoe extract, perhaps the most extensively researched alternative therapy, has also been found to improve the quality of life among cancer patients, while acting as a sedative which relieves the side effects of the traditional cancer therapies. No side effects or harmful reactions have currently been found.

German researchers found—in small human and laboratory studies–that when mistletoe extract was injected directly into or near a tumor it reduced, or even eliminated, the growth of cancer cells, in even in the most advanced cases. Since mistletoe extract was found to also boost the immune system, it gave the patient an additional defense against the disease.

European mistletoe has a rich history, with medicinal properties going back as far as ancient Greece; in fact, the Druids referred to it as “all healer.”  It has been used to treat arthritis, epilepsy, high blood pressure and menopause, but it was really in the early 20th century that it got attention as a possible cancer treatment.

This treatment is not yet available in the United States since it has not been approved by the US Food and Drug Administration (FDA.). It’s also important to note that raw, unprocessed mistletoe is poisonous.

Know your body and what is right for it. Educate yourself about all of your options and become empowered.