Although Digital Infrared Thermal Imaging a/k/a Thermography was FDA approved in 1982 as an adjunctive screening tool for breast cancer, we still do not hear much about it even 30 years later. Here are some possible reasons why…

If you haven’t heard of breast thermography, it’s because this proven technology has been thwarted by the multi-billion dollar American mammography industry.

For over 30 years, it has conducted a successful campaign that has suppressed this life saving technology – at the expense of American women.

Even though experts report in the most prestigious medical journal that…

“Screening for breast cancer with mammography is unjustified…the data show that for every 1000 women screened biennially throughout 12 years, one breast-cancer death is avoided whereas the total number of deaths is increased by six…there is no reliable evidence that screening decreases breast-cancer mortality.” 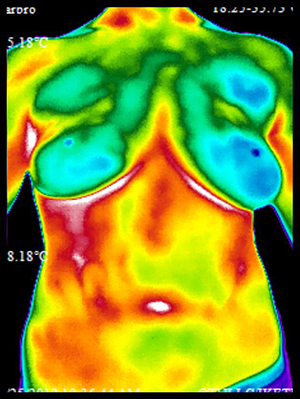 Reputable medical professionals have repeatedly reported in the most respected medical journals that mammography screening to detect early breast cancers is inaccurate, ineffective, and its X-rays are harmful to a woman’s health. The benefits are minimal, at best, but the hazard to women’s health is enormous.

In fact, since mammography screening was introduced in the early 1970’s, the incidence of ductal carcinoma in situ has increased by 328%, of which 200% is due to mammography.

“There is little evidence documenting that mammography saves lives from breast cancer for premenopausal women.”

So then why is mammography so supported and repeatedly prescribed by physicians while no one is talking about the benefits of thermography??

Take The First Step On Your Journey Back To Health

Maybe you have some questions you’d like to ask before you make a decision on becoming a patient. Our patient coordinator is standing by, happy to answer any questions you have to see whether or not Thermography For Health NY is right for you.

Call or Email to Schedule an Appointment: